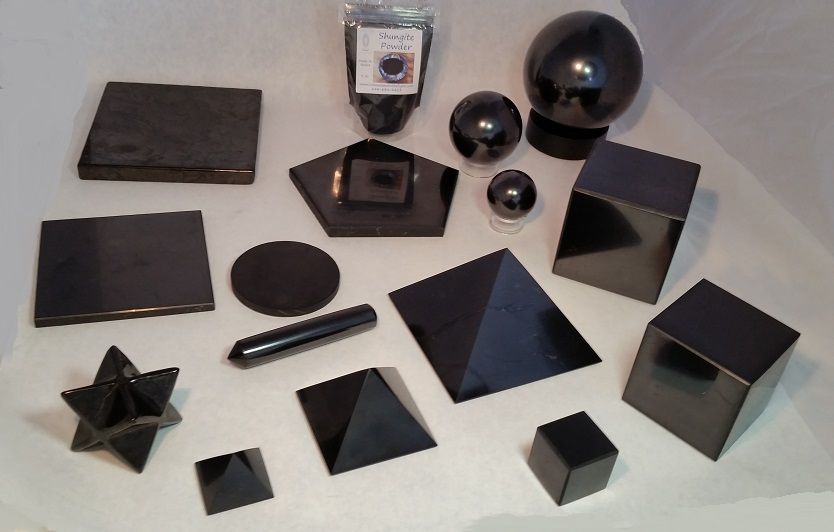 Shungite Not for Sissies

Welp, shungite. There is a whole lot of stuff being said of shungite that ranges from miracle healer to water purifier... to it having every element within it... to, well... there is a lot of stuff being said. The briefest gloss is that shungite is kinda like jet, because it is carbon that is created by decaying organic material, in shungite's case, underwater. The difference between jet and shungite is that shungite was made from the first algae that gave birth to our atmosphere because there were no plants yet. Then the organic material was exposed to and transformed by volcanic heat.

This gives shungite all of the elemental associations (which is as sexy as it gets with a rock, so to speak). Water, because it the decaying matter was in water. Air, because the algae from which it was formed created our atmosphere. Earth, because, well.. it's a rock. Fire, because of the transformation undergone through the volcanic heat. And Spirit, because the initial biomaterial was alive. It's pretty dang old too, though the range on the scientific sites varying its age between millions to approximately 2 billion years old. Meh, it's old.

There is also another thing I can say about shungite. It isn't terribly happy about the information that is currently out there. Chris and I were in the computer room at the warehouse trying to locate good information about shungite since we had some to put up in the on-line store. After a few minutes, it became clear that the information out there was hopelessly skewed. There were mentions of this study and that study with no link whatsoever to the actual studies. The geology info was "sketch", as my daughter says. There were also claims that shungite cleaned dirty water, which I hope no one has actually tried yet without doing testing on the water before drinking it. It IS carbon, which IS used in water filters, but... uhhh, without using it like a filter, I don't know what kind of help it would be for physical pollutants. It makes an awesome gem elixir, however, but use CLEAN water to create it!

Anyway, so I say... "I think shungite needs a fresh reading." Chris agreed. Then I got, what I like to call, the ~Shungite Smackdown~. I literally had a sudden and strong interdimensional whack, or some kind of distinct shove, go through my body. I sometimes feel distinct motion within my energy body that I attribute to some kind of fluctuations going on in the Earth, but this was far stronger and I almost blipped out. I asked Chris if "he felt it too", and he had... but he was lucky enough to be sitting in a dang chair instead of standing up. Weirdness. I asked Chris what he thought it was and he just said, "I think shungite really wants a new reading." I am sensitive to rock energy, obviously, but I've never been bitch slapped by one before. That was new.

Within moments of this event, the computer that we use to do posting and writing at the warehouse had a pop up window virus that literally brought our day of working on the computer to an end. There was nothing else we could do with our day. So, shungite want reading, shungite want reading NOW. So that's what we did. We did a reading on Shungite, that very moment... that very afternoon. Umm, since our schedule became wide open all of a sudden. Not weird at all. Nope.

Err... dudes, seriously. Yes, much of shungite is carbon, which is kinda the same thing as what's in your water pitcher filter, but shungite bearing rock (which is most of what is on the market) is only 50-70% carbon. The rest is ~other stuff~. Some of the ~other stuff~ may or may not be okay to be leeching into your drinking water!! I love it when pyrite is in my shungite. I do not love it when pyrite leeches into my drinking water.

I know it's a popular and trendy thing to do, to chuck a bunch of shungite in water and then drink it, but if you don't know what the ~other stuff~ is in your shungite, you may be cleaning and charging your water in one hand and putting something not okay in it with the other.

We often do workshops about creating gem elixirs and our first rule of thumb is that when in doubt, use a NON-CONTACT method of zooming up your water. We've got some awesome new shungite tiles that are perfect as charging coasters for water that don't require a direct contact method with the water, but you can use a tumbled stone or any shungite in your keeping if you just hold it up to the glass.

Directions to create a gem elixir with a shungite tile (or hold a piece on the outside of the glass):

1: Place a bottle or glass of water on the tile or hold the shungite specimen up to the glass on the outside of it so that the stone is not touching water you drink.

2: Put your hands on the container over the tile or around the specimen that is touching the glass.

3: Connect to the Divine, your guides, or the spiritual beings that preside over shungite itself, and say, “I request to make a gem elixir. Now, please.”

4: Let the energies run for approximately five minutes. Or longer.

5: Seal the work by saying, “I ask to bless, optimize, stabilize, amplify, and seal this work under the Divine. Now, please.”

Since that fun day at the warehouse, I've noticed that I am super sensitive to shungite. Not just as a rock, but as a distinct voice and layer of consciousness of Mamma Gaia (maybe even something larger). The Earth and all upon her are in a fairly tumultuous time of change and transition. Shungite ain't no fluffy, white light, "feel good" stone. Shungite is more like the Dark Cosmic Mother stirring up whatever is in the Cauldron of Creation...briskly. She is a master at the cycles of death, birth, transition, and all the bits and pieces of the primordial creation process. Even the stuff that hurts, the stuff that terrifies, and that challenges each of us to let go of the status quo within our personal and collective lives to undergo transformation into something more. If you want to run screaming from the building, this would be the time.

Well, shungite doesn't "play", but there are stones with which is it particularly suited to work to get stuff done. This is just a partial listing. Please follow your own prompts when you partner shungite with other stone helpers. My personal pocket rock partners are Presili Blue Stones and lodestone with pyrite. That is pretty much my standard go-to support for me on an average day outside of the house.