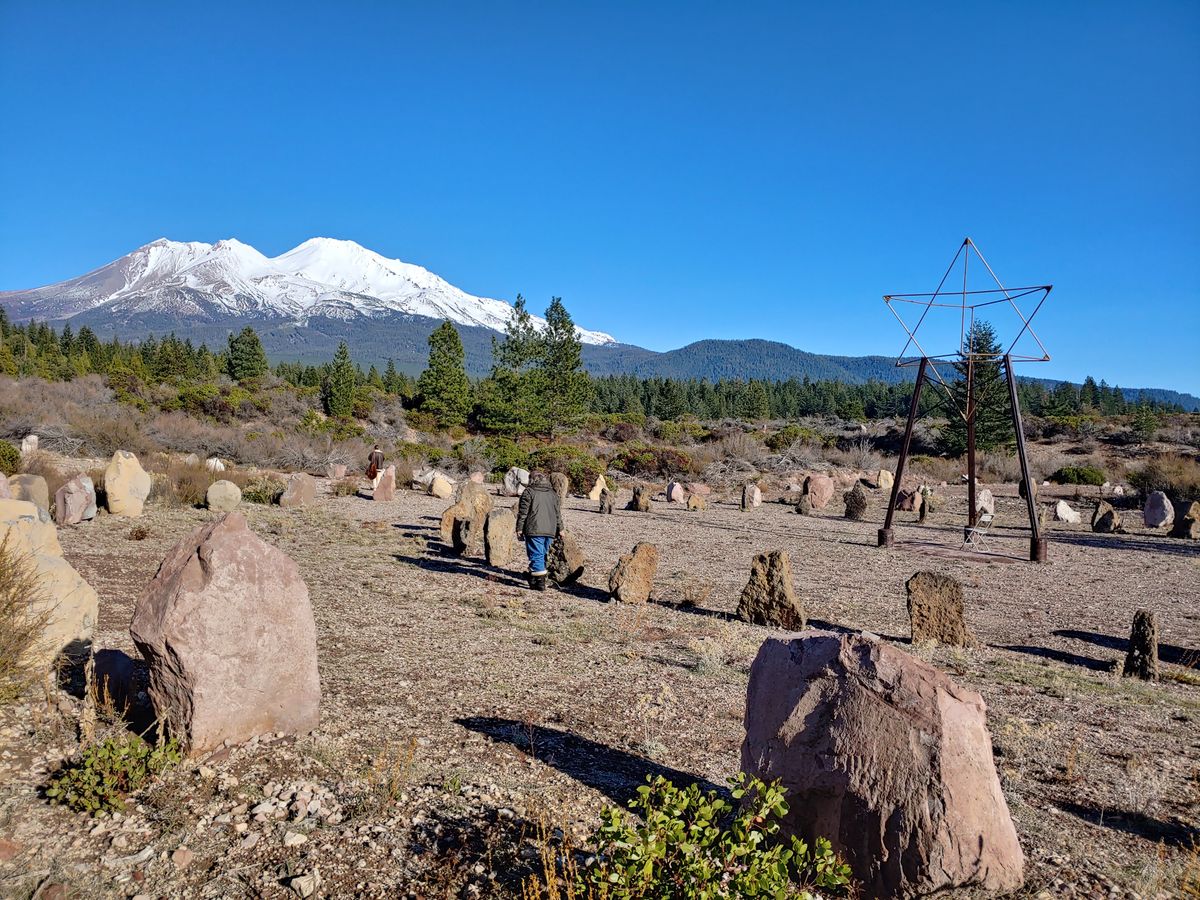 My friend Diane and I have been on a Spiritual journey in Mount Shasta California. Diane has wanted to visit here for two years, she was all ready to come and then covid hit, and everything shut down. She made arrangements several times to travel with different friends and each one fell through. When she asked me to join her, I was IN!

We arranged two tour guides for our trip, each one fantastic in their own way. The first was on 11/11/21 and is called Mt. Shasta #2, Lower San Flat Road. This article is about our second tour, with a young lady named Olga, owner of Galactic Traveller (.space). Olga is a psychic who is devoted to her craft and does her homework before meeting with her clients. She called us the day before our tour to get an idea of who we were and what we wanted to achieve.

For some reason, our Mt. Shasta tour guides wanted to begin our tour at City Park. This is a public park open to everyone, so Diane and I stopped here before meeting Olga for our tour. Big Springs in City Park is said to be the headwaters of the Sacramento River and the water runs pure and cold. It is also said to be healing water, we saw several people leaving with multiple gallon containers they had filled with this water.

Diane and I grabbed some empty water bottle to fill with this magical elixir. The water is very cold because it comes from melting ice and snow at high elevations. I connected with the water as I filled my bottle. Interestingly, since we returned and I have resumed my clearing work, I now see these headwaters as I clear negative energy. We enjoyed dining on this pure clean water for the duration of our stay.

When we were on the phone with Olga, we asked if we needed waterproof boots that we were so glad we had on the first tour. Olga said she didn’t think so but it couldn’t hurt, so we went back to rent the same boots we had earlier in the week and did a little more shopping. I bought a pretty blue headband to keep my ears warm and Diane got some sneakers, even the manager said they were cute, he was right.

Olga’s office is only a block north of the main street in Mt. Shasta City, we found her ready to receive us. The building is a well-maintained older home. The front room has hardwood floors and held three chairs. One wall was filled with shelves displaying Olga’s handmade herbal offerings. She hand-tied bundles of herbs she gathered herself, put intention into and made a lovely display. She had oils with herbs to use on skin or hair, especially in cold dry weather. You could tell she put a lot of thought, work and love into each item, they all had wonderful energy. Diane selected many of Olga’s handmade/heart-made products. As the oversensitive person that I am, I got some hair oil.

We sat and talked about who we are and our goals for the day for quite a while, I told her that I am an Entity Doctor and what that means. This piqued her interest and she asked question after question, she wanted to soak up knowledge like a sponge. After the introductions and herb purchases, we headed out in Olga’s car.

Our first stop was the Peace Garden. Olga told the story of the property owners, whose home is on the property, they wanted to provide a place of peace and love for anyone who wanted to come. As luck would have it, we were fortunate to meet the owner of the Peace Garden, it was another sign that our Angels were with us providing for us, like this rare opportunity meeting this generous person.

The first feature upon entry is a mound of earth displaying statues of Angels and Ascended Masters, crystals of all types and sizes and flowers all around it. People leave crystals, crystal bracelets and pendants to honor the intention of love and peace.

The next garden featured a lovely labyrinth. “A labyrinth is a pattern of pathways that weave in a circle around a central point. You walk through the pathways to get to the center. Labyrinths are about the journey, at least as much as the destination. They can be calming, as they slow you down while you wind your way through the path.”1 Spiritually, you would set an intention of something that needs to be unwound and walking the turns and twists of the labyrinth helps you to find your answer. The center of this labyrinth held an Angel statue and many crystals and offerings.

We didn’t take the time to walk the labyrinth that day, Diane and I came back later, set our intentions and took our time walking the winding path. There were many rocks and crystals placed along the path, Olga said to touch each one as we passed. I touched each energetically, not physically. The energy of this garden was magical and loving, and felt very nurturing.

As we surveyed the labyrinth, Olga was channeling a message for me. She was channeling Spirit who was telling me things confirming messages that I had received from Spirit about this journey and what it will bring. Whenever you can receive confirmation that you are hearing Spirit correctly, it is very valuable. It takes away all of the doubt and apprehension so you can open to receive the gifts being bestowed upon you. This reading was very reassuring for me, thank you Olga.

Our next stop was a nice hike on the road toward McBride Springs. This hike made me more aware of how dramatically different the energy was between different areas that we visited on this vast mountain. This area didn’t have the intensity I felt on our first tour to Sand Flat Road, but there were more trees than rock formations here. The forest was very peaceful and loving but not really friendly or beckoning, it felt quiet and serene.

We passed one area where Olga was telling us there were many Fairies, I told her of my tales with the Fairies and how I couldn’t gain their trust. She told me to go sit in this area and see what happened. She and Diane walked away to allow me privacy with the Fairies. As soon as I sat down it was as if I had made a loud noise in a clowder of cats, the Fairies scrambled to put distance between us. I sat for a few minutes but it became clear that I wasn’t going to make any progress so I got up. Olga asked what had happened and I told her “They really don’t like me!”. I told this story to a friend of mine and she said “You know why? It’s because you have too much Leprechaun energy. Fairies and Leprechauns don’t get along”. She told me that with my small stature and red hair, she had always felt Leprechaun energy from me…Who knew?

The hike concluded in a large clearing that has a circle for many people to sit and worship. Two ladies were sitting in the circle, one with a drum. They invited us to join them but the energy didn’t feel right. Diane found a large rock formation to commune with I went to some trees that were calling to me. Olga introduced herself to the two ladies. Apparently, they knew of each other but had never met in person, a networking opportunity. The lady with the drum played and sang as we each went into our individual meditation. When she finished, we thanked her and went back to the car.

Our last stop was the most spectacular! Olga took us to the private property call Archangel Michael’s Mandala. From the center of the Mandala, you can see Mt. Shasta, Black Butte, Castle Crag and Mt. Eddy, it is in the center. It was magnificent and the union of these energies in this sacred space was amazing.

Olga showed us on Google Maps that it appears as a wagon wheel with 12 spokes. This is a series of large pathways connecting concentric circles, each with a central alter of some sort. The circles and pathways are lined with large indigenous rocks standing on end, each 2.5 – 3 feet tall.

In the center of the first circle that we came to, was a metal pyramid supporting a giant merkaba (3-D 6-pointed star). There was a folding chair beneath the center where someone could site and soak up the energy. The next circle had an altar of crystals and gifts for Archangel Michael. We put the crystals that we brought with us on this alter to charge with positive energy. The next circle contained another metal pyramid but this one supported a 3-D 8-pointed star. We took turns sitting beneath this monument, soaking up the energy and retuning our frequencies, it was a moving experience.

As we walked back toward the parking area, I felt as if I were floating above the ground. We stopped to pick up our crystals that were charging on the alter and the energy coming off of them was very powerful. There is a bracelet that I charged there that is still a bit too much energy for me to wear. I keep trying though. It’s a good thing Olga was driving.

By the time we got back to her office we were grounded again. We took pics of lovely Olga in front of her lovely sign. She was a wonderful guide for us, knowing when to step forward and interact and knowing when to step back and allow us to process the energy were receiving.