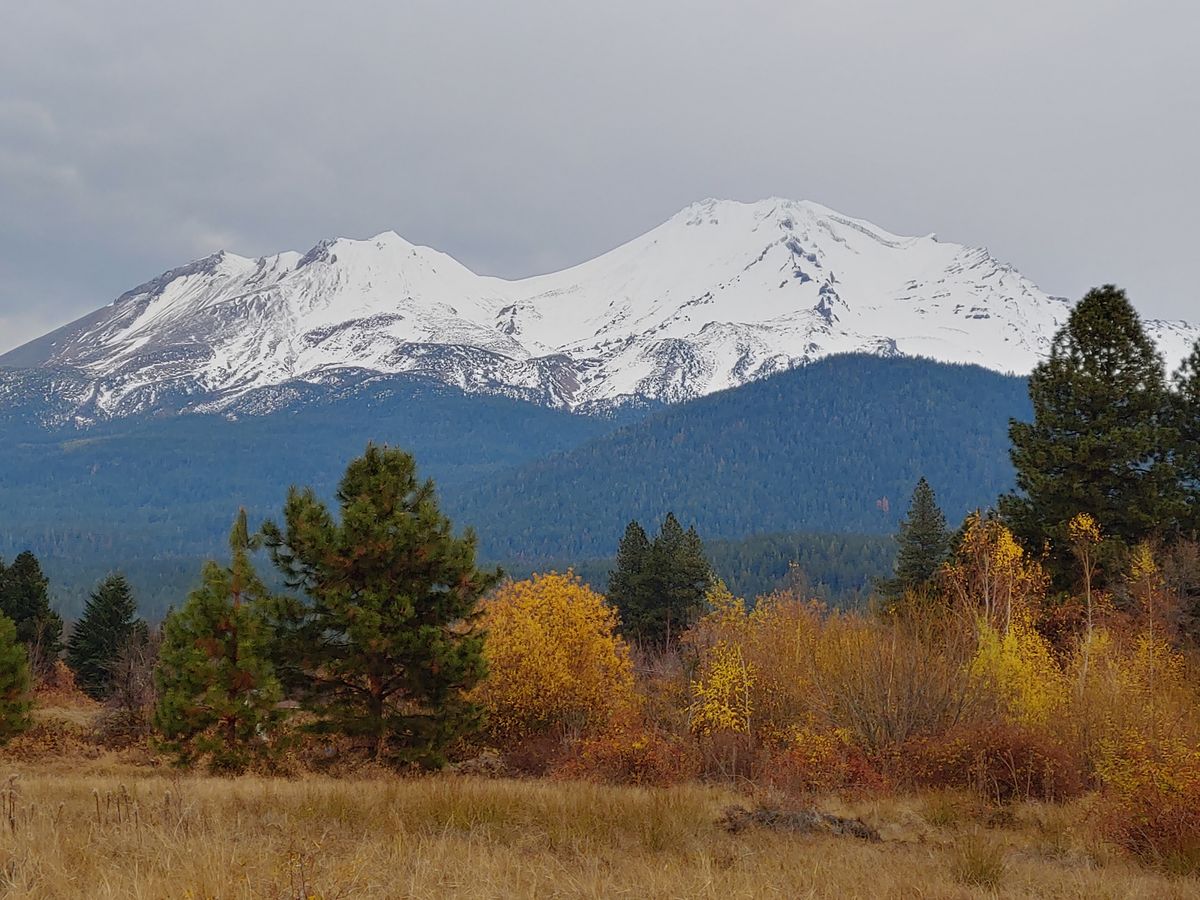 It’s amazing how our perspective changes with age and growth. When I was a kid, my family would go on vacation and stand before greatness in nature and my parents would say “Look at that! isn’t it magnificent?” I would survey the view and shrug my shoulders and say “Yea, it’s nice”. I knew my parents were seeing through eyes I wasn’t able to peer through. As an adult I was better able to grasp the wonder and excitement such a scene would conjure. Since my vibration has gone through many growth spurts and has risen quite high, I see all sorts of things that other people aren’t able to see. You will get to share my unique perspective throughout this four-part blog about this wonderful trip and the things I learned along the way.

My friend Diane and I have been on a Spiritual journey in Mount Shasta California. One of the reasons Mt. Shasta is so magical is below. Another reason is explained in part four of this blog series. Here is one explanation:

“There’s a well-known legend that says that somewhere deep beneath Northern California’s 14,179-foot-tall Mount Shasta is a complex of tunnels and a hidden city called Telos, the ancient “City of Light” for the Lemurians. They were the residents of the mythical lost continent of Lemuria, which met its demise under the waves of the Pacific (or the Indian Ocean, depending on who you ask) thousands of years ago. Lemurians believed to have survived the catastrophe are said to have settled in Telos, and over the years their offspring have been sporadically reported wandering around the area: seven-feet-tall, with long flowy hair, often clad in sandals and white robes.

Lemurians aren’t the only unusual figures said to inhabit this stand-alone stratovolcano, easily seen from Interstate 5, about 60 miles south of the Oregon border. Mount Shasta is believed to be a home base for the Lizard People, too, reptilian humanoids that also reside underground. The mountain is a hotbed of UFO sightings, one of the most recent of which occurred in February 2020. (It was a saucer-shaped lenticular cloud.) In fact, the mountain is associated with so many otherworldly, paranormal, and mythical beings—in addition to long-established Native American traditions—that it’s almost like a who’s who of metaphysics.”1

Diane and I have traveled together many times before, she accompanies me to the crystal fairs and she is a magician at selecting crystals, she can walk up to a table filled with clear quartz points and select the ones containing Angels. Diane is wonderful to travel with both for business and pleasure, she tolerates and protects my over sensitivities to energy, food and crystals. We have always driven in the past; I take all the food along because of these food sensitivities. I am an excellent cook and make almost everything that I eat, Diane enjoys reaping the benefits at dinner time.

I usually take along food that I previously prepared, but because we flew to Redding CA, I took along a shopping list to get everything we needed. Diane was amazed we had to go to three different grocery stores; a regular store, Trader Joe’s and Natural Grocer, that’s SOP for me. After we collected all of our necessities, we drove the hour to our rental house in Dunsmuir. Diane suggested that we not stay in Mt. Shasta proper because I have issues with high vibrational areas, especially when vortexes are present. At our rental home we could both feel that we were on the fringe of the great mountain’s energy, but not in the thick of it. Diane wanted to go out exploring the area, but I wanted to get cooking, so I set up the kitchen and got busy, it was delicious.

We had already scheduled tours with professional guides, see parts two and three of this blog series. As you do on vacation, we wanted to plan to visit everything that was the most interesting to us. We discovered there were waterfalls all around us so we took a day to tour several waterfalls in the area. We have all seen waterfalls and they are very pretty and put off negative ions producing a calming and soothing effect. The falls we visited that day all had very unique personalities and taught different lessons.

The first stop was Hedge Creek Falls, a small waterfall leading in to a tiny creek that had a path so you could walk behind the falls. I watched as hikers would disappear behind the rocks and reappear on the other side. The more I watched this, the worse feeling I was getting. Diane wanted to walk behind the falls but I was sensing dark energy, so I made up an excuse that I didn’t want to walk that far. Even intuitives have trouble communicating our feelings and perceptions, even to other intuitives.

We next went to McCloud Falls which is a stream with three significant falls along its path, this is where Spirit wanted us to be. We started with an easy walk to the lower falls, the energy was loving, inviting and beautiful. It was a single narrow fall where the river was rushing powerfully surrounded by wonderful smoothed rocks and very tall trees. It demonstrated how a small tributary can stand on its own and be powerful. Lovely lesson!

Diane was up for a hike so we continued on to the not so short, not so easy hike to the middle falls, passing some magical scenes along the way. We could hear the middle falls as we grew closer. We entered a clearing and I was instantly connected. This was a wide section of the river making a wall of water flowing more gently than the lower falls.

There was a large rock protrusion in the center of the wall creating two symmetrical curtains of falling water. At the lower area of the river were giant water carved boulders. I could have gazed at these falls all day; it was magical. We both got hungry and made the long hike back to the sandwiches awaiting us in the car. We found a nice seating area off the parking lot with beautiful energy and had lunch.

We decided to drive to the middle and upper falls, driving is the only way to access the upper falls. When we arrived above the middle falls, I was even more in love with them than I was from the lower vantage point. These wide twin falls with the tall trees all around were intoxicating. All the trees seemed to go up into the sky forever, each wanting to tell their story at the same time the thundering of the water persisted…Magnificent! This told the lesson of staying the course, in your own time, and allowing things to happen naturally.

We drove to the upper falls which had quite the turbulent angry energy. There are overlooks where visitors can view the river and falls from above, it reminded me of a Luge, narrow and fast, dancing up the sides of the walls of its confinement, racing to beat the other water drops and get there first. This was the lesson of the very young racing to the perceived finish line before their peers.

Just above this wild river rose a wall that had been carefully and lovingly carved by this river into a masterpiece. The energy was ancient yet refined, the wall was carved into cone shaped protrusions, each with its own independence and personality. Moss was growing on the wall to give each individual more depth of character. I could have communicated with this wall all day.

Our day of waterfalls concluded and we went home to contemplate and review the picture and experiences. The waterfalls have been incorporated into my Spirit Clearing sessions and have really improved my technique of cleansing the negative energies left after removing evil entities. This makes it easier on both my client and myself during the clearing and cleansing procedures.

Another day we visited Pluto’s Cave. I have never been much of a cave dweller, although I have remembered a past life as a cave person. Wikipedia describes Pluto’s Cave; is a partially collapsed lava tube on the northern outskirts of Mount Shasta in the Klamath National Forest.[2] [It was] named "Pluto's Cave" after Pluto, the Greek God of the underworld.[4} The tube is roughly 190,000 years old, which is quite old for a lava tube.[3] The guide book we were using described Pluto’s Cave as a place that Indians used as a medical facility with an attached birthing room. I’m not sure how comfortable you are entering a place where souls leave their bodies, such as hospitals, but there is always a lot of entity activity in these areas.

As we approached the area of the cave, I was feeling uneasy. We found the parking area and asked some hikers who were just coming from the cave and they said “just follow this trail”. We walked down the rocky trail for longer than I expected and came upon an opening in the mountain covered in graffiti. With every step I was feeling more anxious and uncomfortable. As we entered the cave my heart was in my throat and I wanted to run, Diane wanted to explore. Fortunately, there wasn’t much to the cave so the exploration didn’t take long and I got out as soon as I could.

After I was out in the open air, I checked Diane and myself for entity attachments and we both had one lost soul. Both felt like American Indian energy, the attachment to Diane was strong but not aggressive, the soul attached to me was angry and seem to want to punish me, maybe it didn’t like my Angelic energy connection. I removed both of these souls and sent them into the light, the one on me resisted and fought but eventually went.

The entire time we spent in Mount Shasta was absolutely magical. We found healing energy, teaching energy, talking rocks, dancing trees and all sorts of water doing different paces putting out different intentions. We found places to be loving and calm while others were threatening and scary. Some were filled with elementals while others were quiet and serene. Isn’t it amazing how our perceptions change over time and growth? I was surprise and amazed at what I found on this visit and I’m happy I can share it with you.