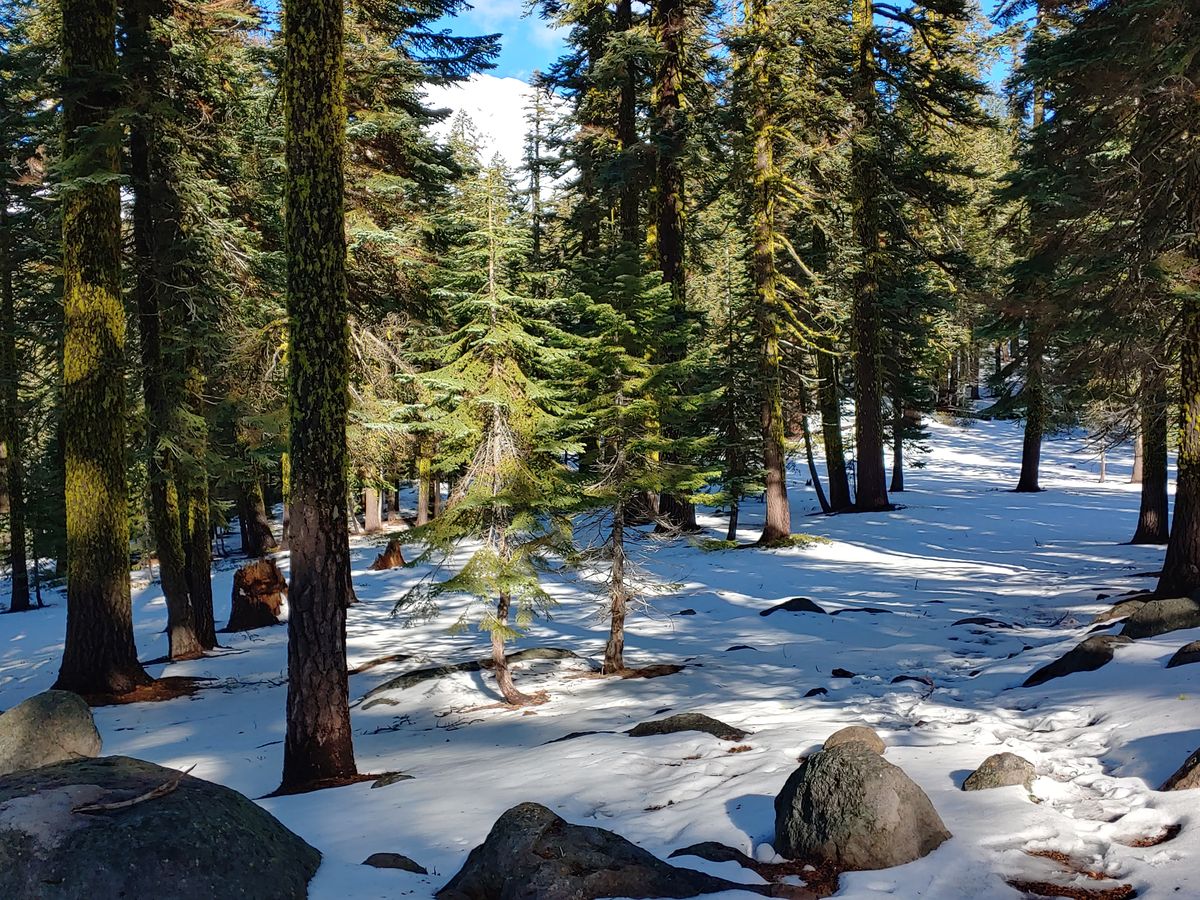 My friend Diane and I are on a Spiritual journey to Mount Shasta California. Diane has been called to come here for two years, she was all ready to come before covid hit, and everything shut down. She made arrangements several times to come with different friends and each one fell through. When she asked me to join her, I was IN!

We arranged two tour guides for our trip, each one fantastic in their own way. Each tour was amazing and magical, the first was on 11/11/21. Eleven is both Diane’s and my number. We are both born on the 11th and I am exactly 11 months older. 11 shows up a lot on this trip, a sign the Angels are with us!

Our guide, Andrew Oser, has been giving tours on the mountain for almost 40 years. He emailed us to say we needed to rent waterproof boots, he didn’t think we would need show shoes, and told us where to get them. Show shoes were a bit more adventurous than I anticipated, so glad they weren’t required.

On 11/11 we rented our boots and met Andrew outside his home. He asked each of us about our goals for our mountain experience. I have learned to be open to whatever Spirit has planned for me. I knew of several issues that needed to be released and healed, but don’t dare override Spirit.

Spirit already had me primed and ready for this adventure. The week before we left, I had two Theta Healing sessions and a three-day Theta healing class review. My vibration was rising, I just didn’t understand how much! All my gifts were opening even more, I could see, hear, feel, and know more than I had before. What an interesting and intense afternoon we had ahead.

After putting on all of our gear, each of us with a back pack, sit-upon and ski poles we used for balance and of course our rented boots as well as layers and layers of coats. We started down the fresh snow-covered trail, the air was cool and crisp but not too cold, just perfect. The snow had fallen recently and there was not one footprint of man nor beast anywhere, ours were the first. I tried to walk in Andrew’s footsteps as he led the way, but his legs are much longer than mine.

We passed mammoth pine trees that seemed to call to us, many wanted us to lay hands on them to receive mutual healing. There were tiny little pine saplings and their taller older siblings that appeared to be Sugarplum Fairies, their branches held straight out as if they were twirling around and I heard squeaky little girl voices chattering with glee as they danced. The trees were delighted at our presence and I felt welcomed and loved.

I stopped and looked into a clearing in the forest where there was some mist and fog, it seemed to be inhabited with elemental beings, earth Angels. I could hear faint whispering, which followed us as we proceeded.

We came to the first outcropping of rock, magnificent specimens of black igneous rocks, some jutting straight up in the air. I heard them all calling to me “Over here! Over Here! We’ve been waiting for you ALL DAY! Me first, ME FIRST!” I went over to the loudest stone and put both my hands on it. Diane and Andrew waited patiently for a few minutes, then Diane said “She may be a while” so off they went to do what they had come to do. I had just found what I had come to do, Thank you Angels!

As I stood in the fresh deep snow with my hands on this magical rock, it didn’t feel cold, it felt very loving and healing. My palm chakras opened up and my entire hand was buzzing with the healing energy being sent by this wonderful rock. I saw a vision of a person, which is very unusual for me to see a clear picture like that. It looked like a native female with very simple features and she had a blanket or scarf around her head. As I was taking in the loving energy, another rock broke my concentration and said “It’s MY turn now.” I went to the next rock, then the next and so on.

I was communing with these stones for quite a while and thought that I should check on Diane and Andrew. I found them at the top of the rock grouping, meditating. Andrew was leading a meditation about sending our energy deep in to the mountain, connecting with the earth’s magnetic field. I realized that I was standing on Mt. Shasta but was only interacting with energies and beings on the surface, I wasn’t connecting with Shasta herself. I sent my consciousness down into the mountain and felt a low rhythm, like the beating of a drum. The mountain is alive and breathing, nurturing and supporting all the creatures on her surface and I’m sure some magical happenings within her.

I really wanted to turn around and receive more healing from my friendly outcropping of stones vying for my attention, but I didn’t want to disturb the meditators with snow crunching under my feet, so I sat down on a small rock and energetically connected with the rocks so near yet so far away.

We started along the trail for a few minutes, then Andrew stopped and said “I come up here for the silence, listen to the silence.” I replied “Silence? What silence?” Andrew asked “What do you hear?” I said “I hear the trees talking, singing and dancing, I hear the Fairies whispering in the forest, I hear the rocks calling to me and I hear the baritone of the mountain. I have a quartet!”

We continued down the trail to another outcropping of large rocks, again calling to me to come touch them. I said “You don’t hear this?” and went running over to the loudest stone. Knowing not to wait, Andrew said “when you’re done, follow our footprints to the large hill of rocks, that is where we’ll be” and off they went.

I stood with both hands on the healing rock and found the energy was very different than the first group, it was more of a gentle tingle as opposed to a strong buzzing. Did this mean that I had already done a lot of healing or did this mean that this is different energy? Does it matter?

I again received a vision but this time it was a native male with very distinctive features and an aquiline nose. He looked very brave and confident. He didn’t look directly at me like the first face, but off in to the distance so I saw his silhouette. This time I was better at allocating my time evenly between all the rocks that called to me. Some were more powerful than others. I was beginning to tell that each rock in an outcropping had its own individual energy and personality while being a piece of the whole. The rocks with the faces were the main spokes-stones for the community, they were the loudest. What they had in common was they all wanted to help me.

The healing rocks that we encountered were primarily flat with various shaped sides. There were some rocks that we encountered that were perfectly round, like a giant bubble, there were usually two together, sometimes with a third not far away. We saw several of these groups. These round rocks have a very Galactic (alien) energy to them. I got the impression that they were put here to spy on us and send information, so I steered clear of these, they felt very creepy.

I followed the footsteps around to find Diane and Andrew, they called to me to help me locate them. Another group was hiking from the opposite direction but they didn’t have the balance poles. Those came in handy as some parts of the trail were steep and slippery. Most of the time I just held them up in the air, Diane was laughing at me for this. When my arms got tired of holding them up, I straightened my arm and held the poles behind me. I teased Diane “Stay out of my auric field” as I rotated the poles to denote my space.

I found my group sitting under an enormous projection of rock, eating their lunch. I sat down facing this fantastic hill and discovered that there were several separate and distinct personalities within this rock formation. As I studied each section, I could hear it singing, as I moved to a different section, I heard that one’s song, so I could only hear one section at a time, the one I was focusing on. The section toward the end of the formation was the male, protector. It had a deep voice and slow mournful song. Two sections away was the maternal section, it had a light female tone and bouncy tempo as it took care of all the “little ones”, (Still not sure what she meant by that, but does it matter?).

After we finished eating, we got out our sit-upons to meditate. I should have gotten my sit-upon out much earlier. I was sitting on snow and of course melted it. Now my tush and legs were wet and I was getting cold! We had a lovely meditation tucked into the recesses at the base of this magical formation. Andrew started us off and then allowed us to go wherever our Angels led. I listened to the song of the rock and tried to unite with this energy to understand what it had been through; it was an amazing experience!

Andrew then led us to a rock called “The Altar”, a large flat rock jetting up from the mountain looking like an altar. Diane and I both put our hands on this rock. Either I had already received the healing energy I needed or this rock had an entirely different energy. There was no buzzing, tingling or much communication at all. It was a lovely rock but not as interactive as others I had encountered, you can’t connect with everyone.

We sat and meditated for a few minutes offering our love and gratitude to the mountain for sharing so many of its magical features, especially the healing it had given to me. There were no words exchanged, only loving grateful energy. This is pure joy!

We headed back the way we came, walking in our original footprints, I laughed at how small some of them were. As we passed the healing rocks, I sent my love and gratitude, as we passed the Sugarplum trees, I sent the energy of dancing with them and applauding their performance. I listened to the singing of the Fairies and the beat of the mountain. It was hard to leave this magical setting, on a perfect afternoon of 11/11.