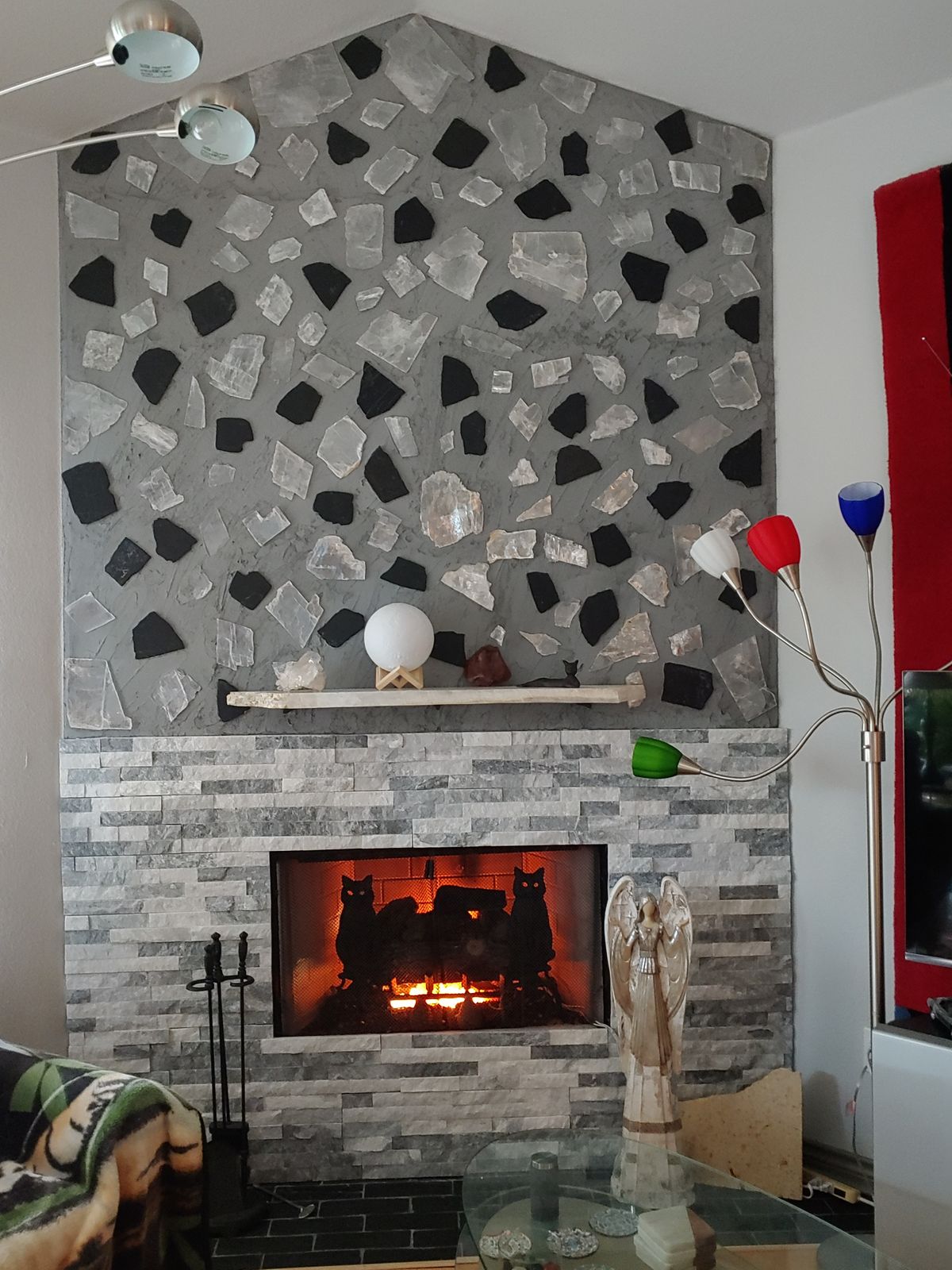 I first learned about Shungite from the Crystal expert Adrienne Goff. I was attending her Crystal class and she talked about this amazing crystal that does all kinds of magical things. This crystal, found only one location in Russia, is a pain reliever, heals almost everything, cuts EMF from technology, purifies water and fertilizes plants. She also told us about rooms lined with Shungite which existed only in Russia at the time, now there is one in Connecticut. These rooms concentrate the healing power of Shungite. Children which had been abandoned would be put in these room for less than an hour and the children would calm down and their emotions would normalize. People from the the Chernobyl nuclear incident would frequent these rooms and they would come out healed. Hearing about these wonderful results, I decided I wanted my own Shungite room but I wasn’t quite sure how to get there.

Shungite, like other solid black stones, absorb negative energy. Black stones don’t have the ability to clear themselves so like a sponge once they’re full they’re done helping you. The way to continually clear energies from crystals is with the power of Selenite. I have a vendor who owns the Selenite mine in New Mexico and because the New Mexico selenite grows in flat layers like tile, it is perfect for this purpose. New Mexico Selenite was actually used as windows before glass was invented. I decided if I combine the powerful black Shungite for healing, absorbing negative energy, pain relief and protection from EMF with the translucent white New Mexico selenite to clear and transmute negative energy into positive energy, that would be the ideal combination!

My house has a beautiful wall with our propane fireplace but has never been finished. Since propane is very expensive, we never actually used the fireplace.

Having never installed tile myself, I attempted to hire somebody. Everyone I contacted was fascinated with the idea but wasn’t interested in executing it, so, it was up to my husband Matt and myself. Matt was reluctant at first, but he did a fabulous job. As with any project, it was quite an education as we were challenged every step of the way.

First, we needed to figure out how to install the brackets that would hold the 35 lb. New Mexico Selenite mantel. Being vertically challenged, I insisted that the mantel not be mounted too high, I want to be able to see the top. Matt cut out sections of the drywall to find the studs so he could install these brackets. Next, we found out that we needed cement board behind all of the tile so, we researched and installed cement board on the entire wall and floor area, a new experience for both of us.

Demolition of the old hearth was on Christmas day 2018 and we decided to install the new hearth level with the wood floor. I wanted to use Slate, but was having trouble finding it in the large format tiles that we wanted to use to simplify the look. Once the old wood hearth was demolished, we realized floor was not level and the easiest way to fix it was to use smaller tiles. Staying with the black and white theme, we found the perfect black slate tiles and finished them with dark gray grout.

We found some lovely quartzite stacked stone tiles in various grays, charcoal and white to go around the firebox. The colors went perfectly with the theme that we were going for. Stacked stone doesn’t need to be grouted, so Matt was on board with that. Before installing these, I went through the boxes of tiles and matched the rows that I liked, putting the most prominent tiles at the top. Installing the stacked stones went very smoothly and the end result is lovely. Once again, fabulous job Matt.

All that was left to figure out was the installation of the natural Selenite and Shungite tiles. Although we had spoken with many different experts at several different tile stores, they were having trouble grasping our vision. As we were explaining that we wanted a very organic mosaic look, each expert looked at us like we were out of our minds. They had never heard of anything like a natural mosaic look, and were trying to figure out how to properly grout it. Because many selenite pieces have selenite coral around them, we didn’t want any grout at all. Again, the key being natural.

We wanted the background to look similar to a stucco wall, only gray instead of white. The experts we spoke with insisted we needed as bright a white mastic as we could get or the selenite would disappear. I disagreed, because Selenite is transparent or soft white, the darker the gray the better to show them off. I finally called the manufacturer of the thin-set and asked them the best way to install these tiles. They had never heard of such a thing either… it can’t be all that unique! The manufacturer said to use their glass mosaic thin-set with an epoxy added for extra adhesion. I asked what was the best way to tint thin-set gray, they said they only make dies make are for grout. I asked whether it was alright to mix in some Shungite powder for tint and they agreed, maybe just to get me off the phone. So now we are doing something that nobody has ever done before according to all the experts and nobody quite understands. And here we go…

Matt had to go to Taiwan for work, I always knew setting the crystal tiles was up to me so it was my opportunity to shine. I took a bed sheet and taped it to the floor replicating the area of our wall. I proceeded to place each tile to achieve the organic look I wanted. I made samples of the thin-set with different concentrations of Shungite powder to figure out the exact color we wanted. I added some Selenite powder to the thin-set to assure the Shungite was in direct contact with the clearing Selenite at all times. I taped off the edges of the wall carefully to achieve the border of the stucco look. Once everything was arranged installation went smoothly.

Once everything was set and cleaned up, I gently placed the 35-pound New Mexico Selenite mantel on the new brackets and the energy from all the crystals together exploded! The power of all the Shungite and all the Selenite merged quite powerfully and I had to run outside to catch my breath. Composing myself, I returned and sent Reiki to harmonize all the energies together. This is an amazing wall from which to feel the energies. POWERFUL!! All my friends say the pictures don’t do it justice.

After Matt got home, he was thrilled that the wall was finished. The final piece was emulating the fire in the firebox. We removed everything from the firebox, put an LED light on the bottom and covered it with Himalayan pink salt. This looks like the red embers of a fire and seems quite real. We found some LED light bulbs that flicker like a fire and tucked them behind our gas logs so you see the fire coming through them. When you see it in the middle of the night it looks like there is a fire flickering away.

We are both thrilled with the way our crystal wall came out. Matt often says that it is better than he expected. I would love to share it with you.